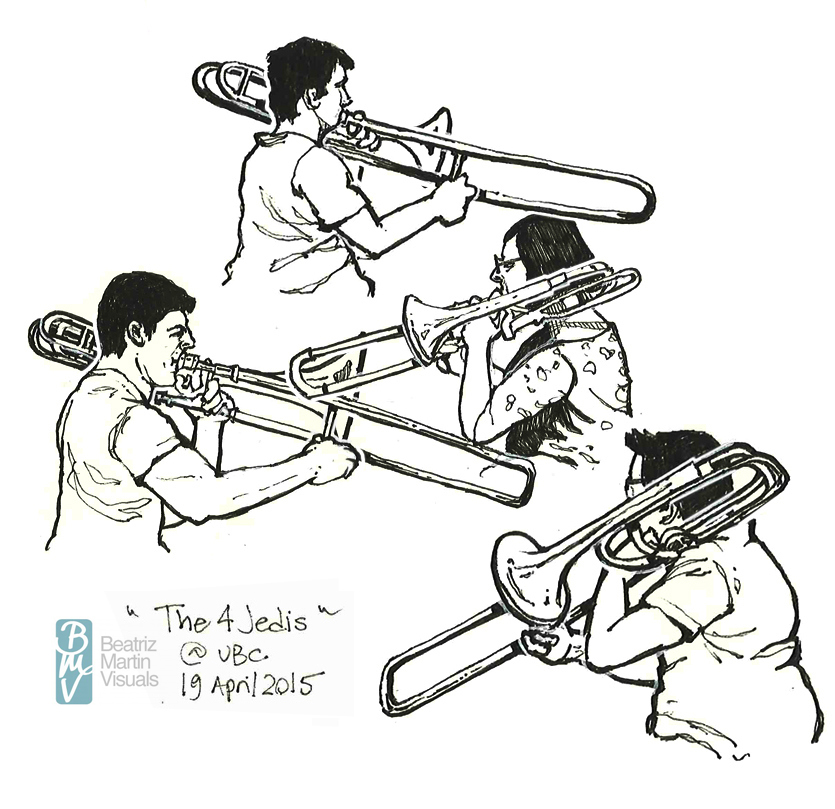 Music in Random Places
It doesn’t need to take a lot of work…!

We’ve all seen them before, online or live:  Flash mobs, showcasing artistry, imagination, and excitement in an apparently spontaneous bust of creativity.  There are some great videos of orchestras, dance groups, commercial advertising, and many more.  My personal favourites are the Ninja “Dare to Fight” and the Bristol Lightsaber flash mobs, mostly because they would be so fun to be part of!  However, it always struck me a something that would take one huge pile of organizing, especially looking at the musical or dance production videos.  The number of people, the coordination and timing, the production values in some videos; it all seems a bit daunting to achieve.  This got me to thinking: Does it really need to be that complicated?  If the goal is just to have fun and make music, but to also entertain an unsuspecting audience, does it need to be dissected and planned to the second?

It seems like more and more music performance is moving out of the traditional “Concert Hall” space, out into newer, random, and unexpected places.  These locations, such as train and subway stations, malls, outdoor squares and streets, all share the idea that the potential targets (people, an audience!) would not anticipate hearing a musical performance as they use that particular space for its intended purpose.  So, it’s like the old adage says: It’s all about LOCATION!

There was a article years ago on NPR, about Random Acts of Classical Music, and what was so interesting about it was that it showcased a few different approaches to the idea of not just a flash mob, but of simply making music somewhere unexpected. Whether is is the out of context path taken by the Cobweb Orchestra, rehearsing in multiple unique locations across Northern England, or an outdoor street performance by Spira Miribilis, including street traffic, the unexpected nature of the performance draws people in to becoming an audience even though they were not expecting to be one.

I was reminded of this on my last day at UBC in April after all the performances, recitals, and even packing was all done.  4 of us trombonists, so busy during the school year, finally had the time to sit down and play quartets, having said we “had to do that sometime” for the whole year!  Due to the nature of space availability, we began to play in our practice area in the architecture building.  However, the volume quickly began to disturb the few other students in the building working over the weekend.  We decided to not antagonize our neighbours any further, and instead took ourselves to an open area adjacent to the music building.  We had only planned on playing for ourselves, for that opportunity to make great music and have fun reading down charts.  No sooner had we started, however, when a passerby wandered up and asked if she could stay and sketch our group.  She so enjoyed listening that she stayed outside with us for the 2 hours we were outdoors playing!  Over the afternoon, we may have had a total of 10 people wander by and do a bit of a double-take, wondering what was up with this random group of trombonists.  When we were done, our artist-audience member wanted to know when we’d be playing next, where she could see and hear us, and what else was going on in music at UBC.  She had enjoyed the afternoon of beautiful weather and music that she was not expecting to run across, and was looking for more!  Our goal of going outside to play had been for our own music-making enjoyment and to not aggravate people in our indoor space, but instead it turned into an opportunity to pull in an unsuspecting audience.

Well, we definitely did not see the audience numbers found in some flash mob videos on YouTube.  But without even trying, we connected with a listener who wanted and was actively seeking more musical performances.  I wonder what would have happened if we had taken an extra few minutes and consciously picked a location where there was actual pedestrian traffic.  Would we have snagged more unsuspecting listeners?  Would they all have wanted to hear more?  Who knows…  but for the 4 of us trombonists (or 4 Jedi, as we ended up being inadvertently named…), as much as we had started with the intention of playing for our own enjoyment, it was augmented by the enjoyment of those listening.  It doesn’t need to be complicated, especially if the goal is to simply make music!